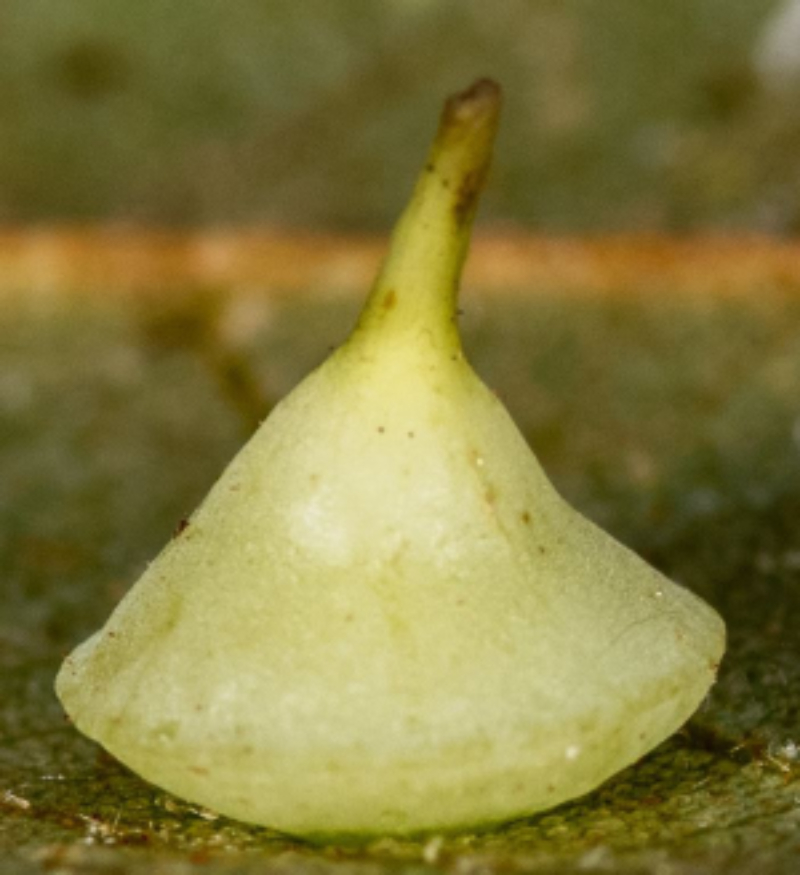 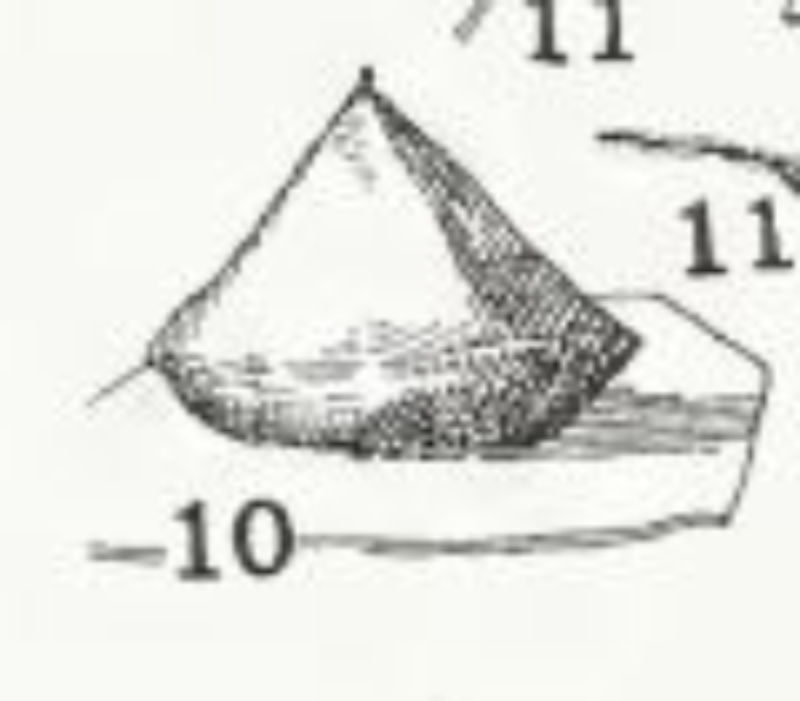 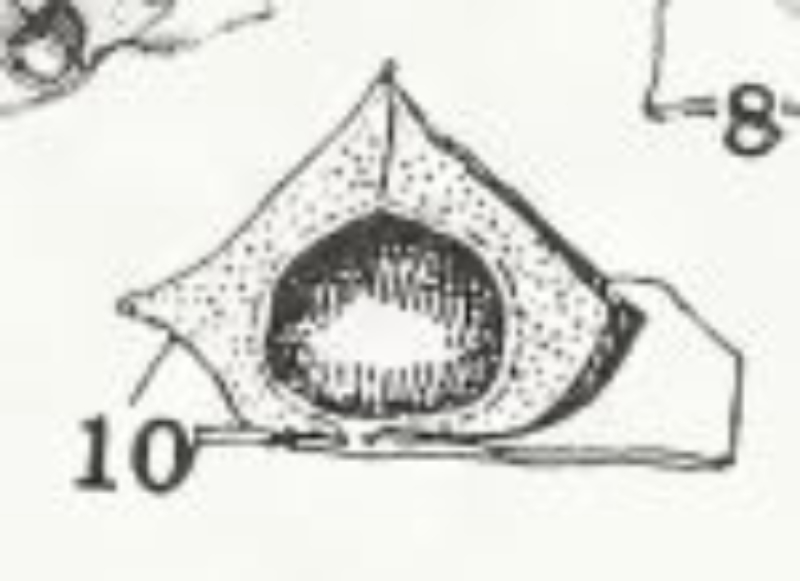 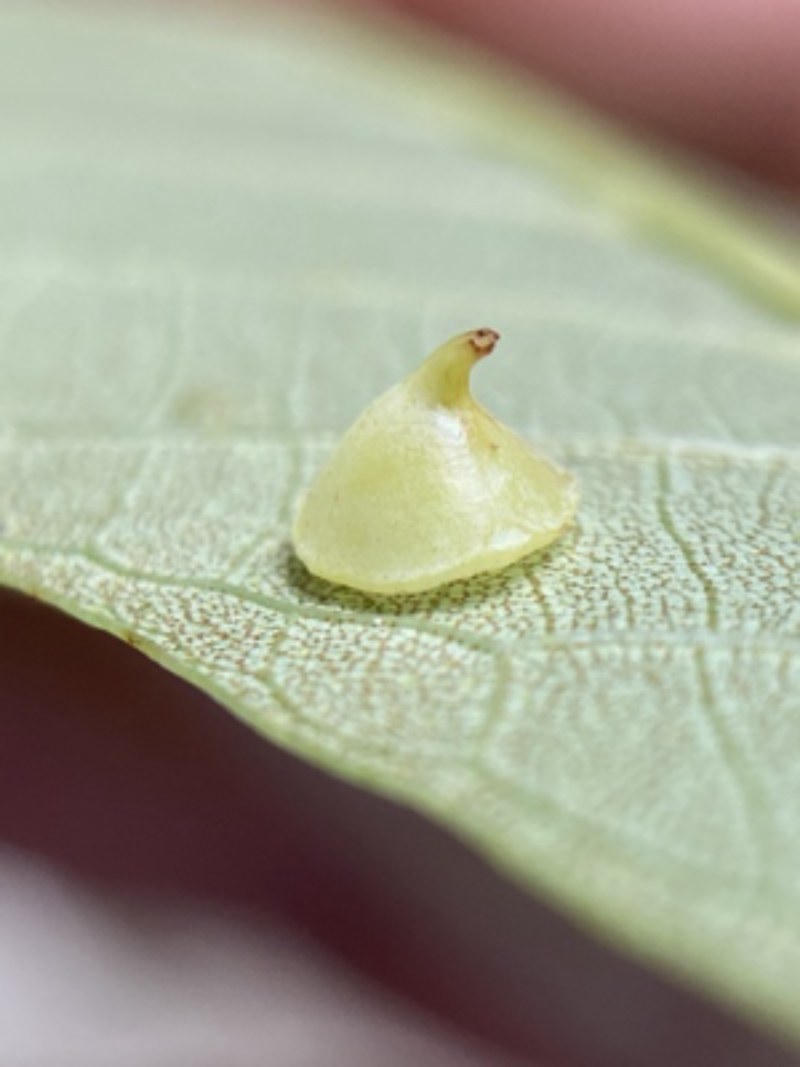 Our ID Notes may contain important tips necessary for distinguishing this gall from similar galls and/or important information about the taxonomic status of this gall inducer.
The Gall Midges (Diptera: Cecidomyiidae) of Hickories (Juglandaceae: Carya)
“

Gall (Figs. 10, 134-136): Common, found on Eucarya hickories; single or clustered, on lower leaf surface between veins; height 1.9—4.1 mm, conical, basal edge flared, acute or rounded, the base adjacent to leaf either flat or convex, the central part of the base permanently hard and differing in texture from softer outer part (Fig. 136), lateral sides of cone in profile convex at first, becoming concave, then furrowed upon further drying, the apex obtuse to acute; hairless, green, turning brown, crimson, or purple, not sticky; base with shallow, circular, central excavation, the leaf without exfoliation around connection; larval chamber ovoid, located at base of gall, surrounded by yellowish pellicle different in texture from the soft, large-celled usually purple tissue beyond that partly collapses with age; a bundle of fibers present between apex of larval chamber and gall apex. Galls of C. sanguinolenta and C. conoidea are most similar to one another in shape, but that of C conoidea bears short, rigid, sparse hairs.

Affinities. — Galls of this species resemble closely enough those of several other species, C. biretta, C. conoidea, C. lunata, C. marginata, and C. stellata, to indicate some relationship among them, given other similarities of adult and larval characters. These species differ only in the shape of their galls, which are conical with their extensive soft, large-celled tissue eventually collapsing. Between that tissue and the larval cell is a pellicle that is at first soft but eventually hardens into a brittle covering. The soft tissue mostly deteriorates during the winter. The base of the galls, through which pupae eventually escape, is shield- like and smooth, even on otherwise hairy galls. The conical galls only superficially resemble those of C. persicoides and C. turbanella. Galls of these last two deteriorate differently and pupae break out of the side of the gall rather than the base. Also, the male antennae and genitalia of these two species place them in another group.

Biological notes. — Tiny, green, occasionally red galls with first instars were found as early as mid- May in the Washington, DC area. By mid-June, both small and full-size galls were present with first and second instars, respectively. Small galls with first instars could still be found as late as early August, although the preponderance of galls found after mid-July contained second in- stars. Third instars were found beginning in early August and by late August most galls contained third instars. Galls remain on leaves until leaf drop in October. Many galls are red or purple by autumn but some remain green. Pupae escape through a hole made in the base of the gall, to the side of the central, harder part (Fig. 136).