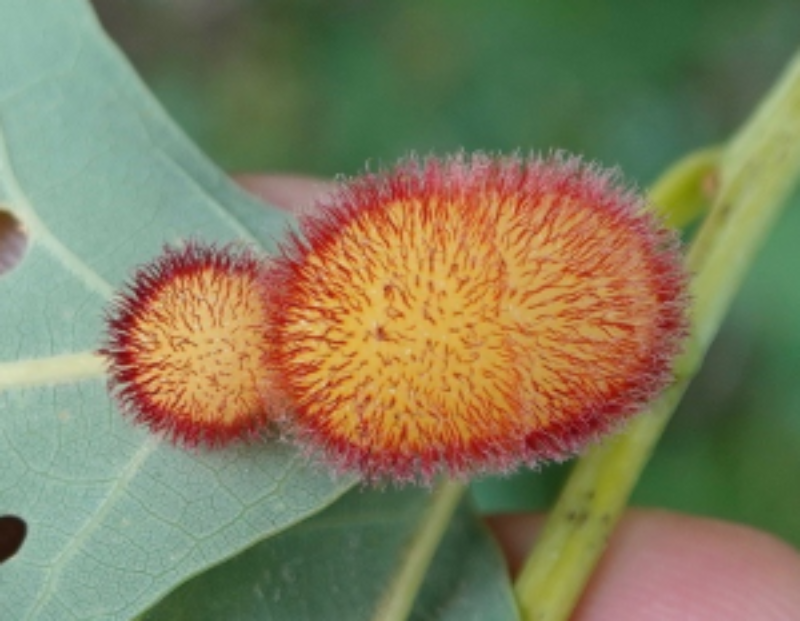 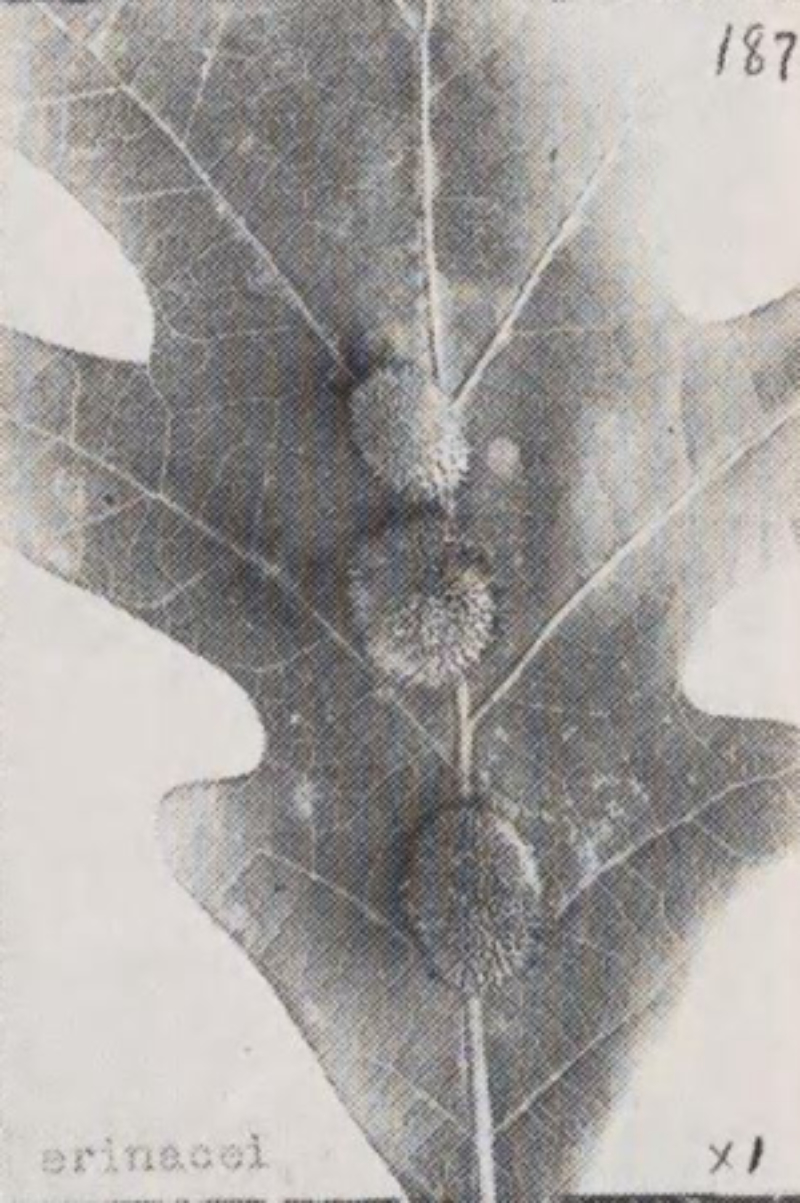 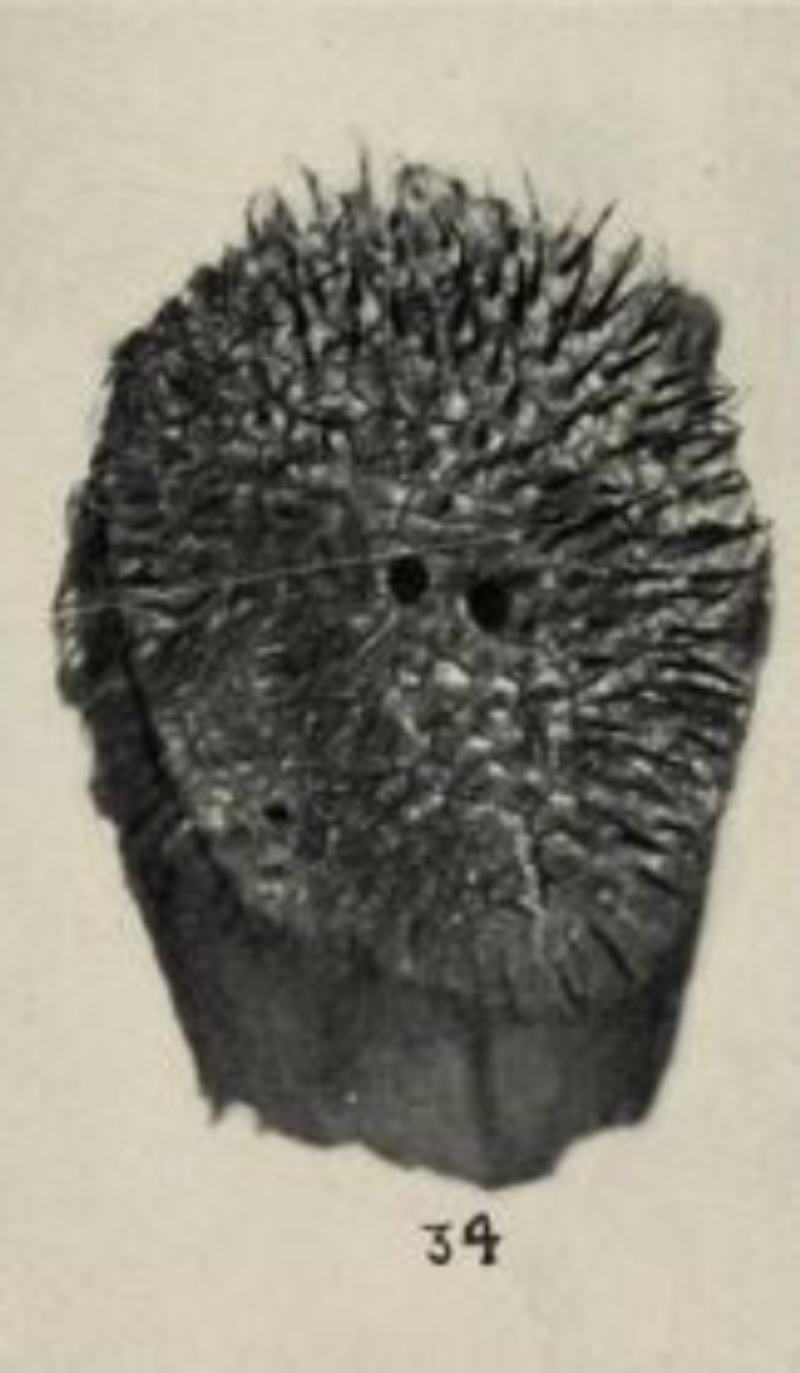 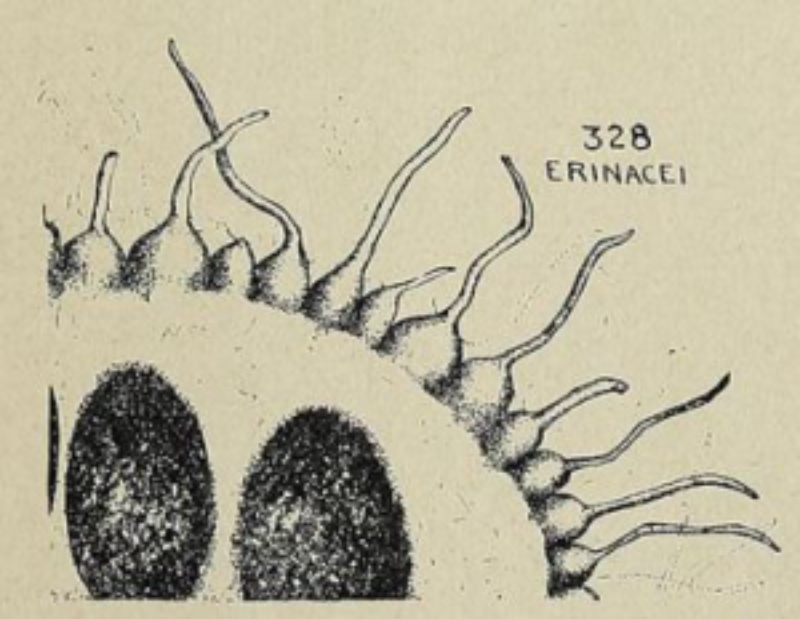 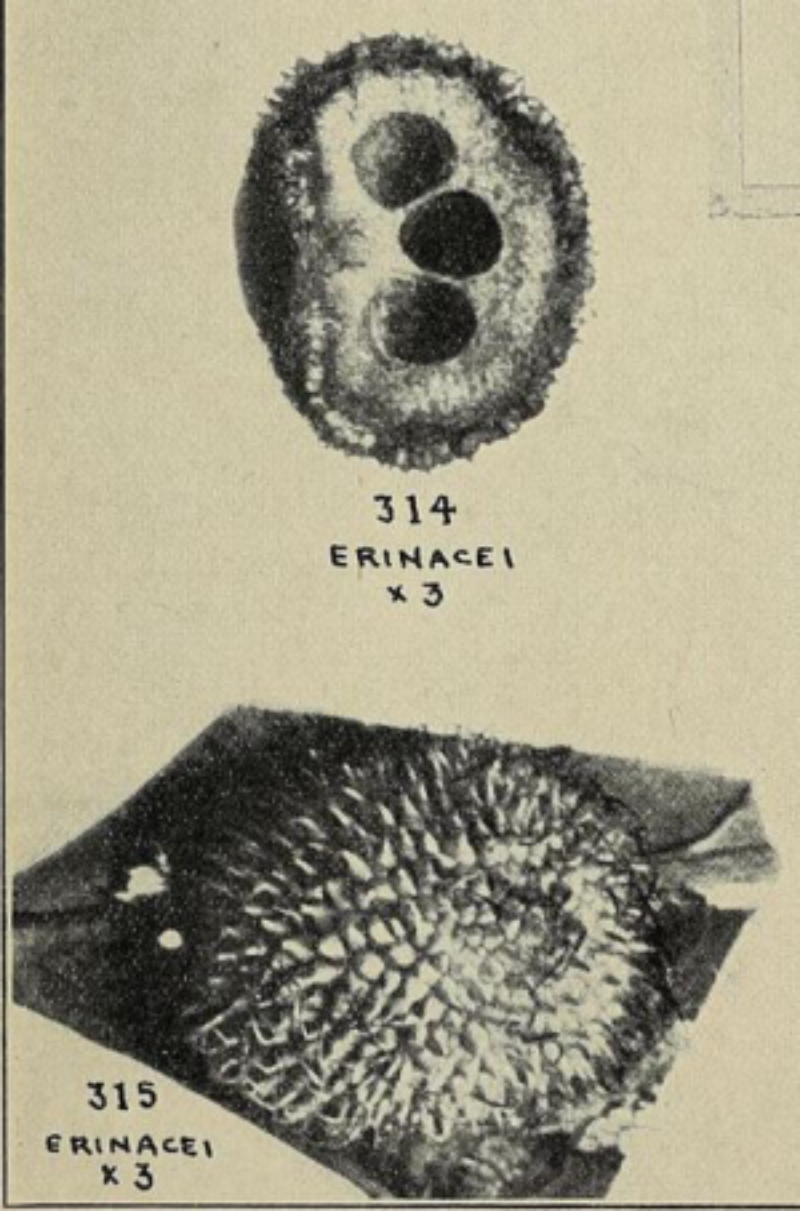 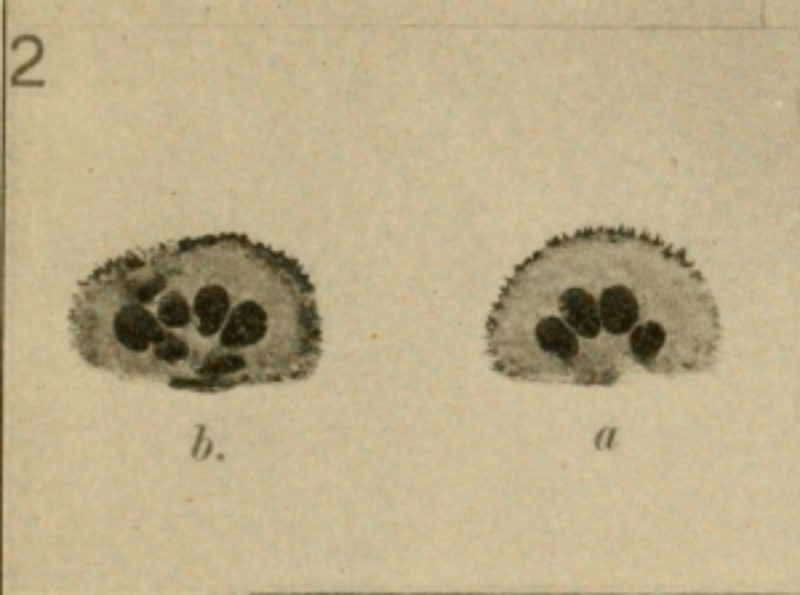 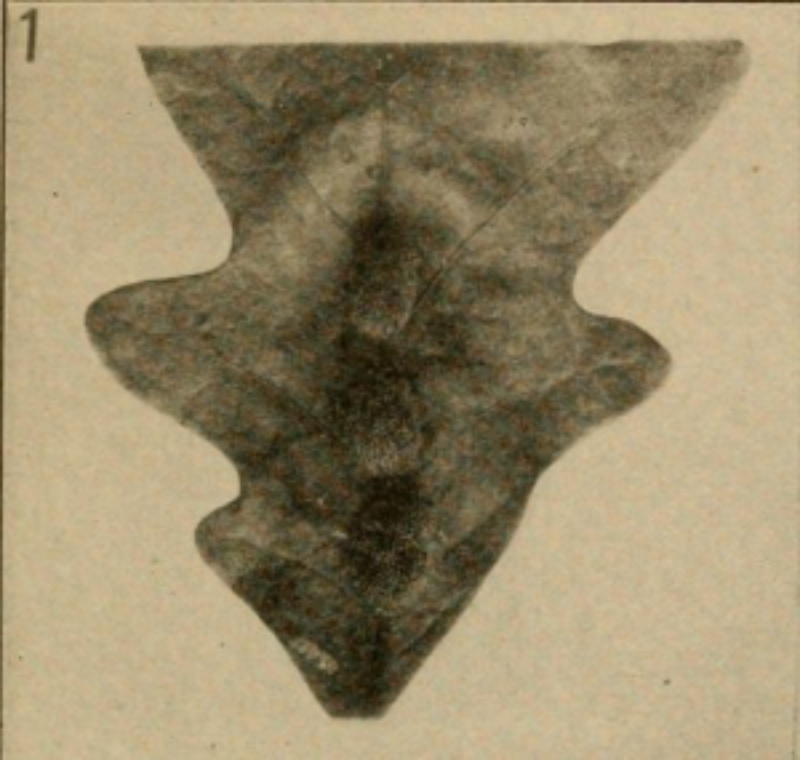 Our ID Notes may contain important tips necessary for distinguishing this gall from similar galls and/or important information about the taxonomic status of this gall inducer.
A Study of Dryophanta Erinacei (Mayr) and Its Gall
“

The Oak Hedgehog Gall is rounded or oblong, with the surface finely netted with fissures, and more or less densely covered with spines. It varies in length from 10-15 mm, and occurs on both sides of the White Oak leaf. The point of attachment is generally on the midrib (Fig. I, Pl I), though it is often found on the lateral veins. When young it is yellowish green, but in autumn it becomes yellowish brown, much lighter in color than the tinting of the leaf. The gall first appears late in June, and reaches full development about the third week in August. It is widely distributed, having been reported from New England, North Carolina, Iowa, Illinois, Indiana, Kansas, Michigan, Ohio, Virginia, Canada, and probably Florida and Colorado.

A longitudinal section through the gall shows that it contains several chambers varying from two to eight in number. These I have named according to their location. First to be noted are the central cavities, (Fig. 2a, PI. I), which measure 2 mm x 3 mm and are located in the central portion of the growth. These are occupied by Dryophanta erinacei and the parasites. Second, there are the lateral cavities, (Fig. 2b, Pl I), situated at the side and base of the growth and measuring 13 mm x 2 mm. These are occupied by inquilines. Lastly, there are to be found the peripheral cavities, (Fig. 8a, Pl II), located on the coriaceous portion of the gall, and covered with the basal layer of spines. These are 1 mm in size, and are likewise occupied by inquilines.

The gall was first described by Walsh in 1864 under the name Cynips q. erinacei. When Mayr in 1881 established the genus Acraspis he included the insect causing this gall, which therefore was known as Acraspis erinacei. The first description of the insect appeared in a paper by Beutenmiiller '09, entitled "Species of Biorhiza, Philonix, and their allied Genera, and their Galls," in which he places it in the genus Philonix. As will be shown later in this discussion, the insect belongs to the genus Dryophanta, and should be known therefore as Dryophanta erinacei (Mayr).

In the open the [sexgen] adults did not emerge until the twenty-ninth of May, and continued to oviposit from that time until the fifth of June. The egg is oval, provided with a pedicel 750m. in length. It is always placed in the fibro-vascular bundles, and at an angle of about 80° to the axis of the leaf.

On the twenty-fifth of June the first evidences of gall-formation appeared on the leaf-veins, the hypertrophied tissue pushing through the slightly ruptured epidermis. In galls gathered on the first and second of July, larva were found measuring 375 um. During the summer, molts were observed after which the larva measured 750 um, 1.25 mm, 1.75 mm, 2.25 mm, respectively, thus showing five stages during the life-history. Fig. 19, PI. Ill, shows a larva 1.75 mm, obtained about the middle of August. From this time, the thorax does not show a great increase in size,, but the abdomen loses its reflexed character, becomes globose,, and increases in size until pupation. The first pupa was obtained on the fifth of September, but the adults did not emerge until the fifth of November. Fig. 5, PI. I, shows a pupa of the agamic form.

The agamic form of Dryophanta erinacei emerges from the oak hedgehog gall about the fifth of November.

The insect makes its way to the leaf and flower buds of the white oak, where oviposition takes place. On the tree where our observations were made, it continued to emerge and oviposit until the twenty-first of November. The insects are most active on cold days or early in the morning. During the warm weather they are inactive and sluggish, hiding at the base of the petioles, in the crotches of the young shoots, or in the crevices of the bark. They have been taken in this vicinity on rare occasions in early December, but usually they succumb to the first heavy frosts at the close of November.